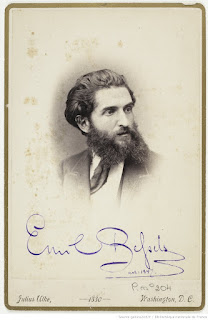 Some time ago on this blog, I gave the evidence that Emil Bessels had a deeper potential motive to poison the Arctic explorer Charles Francis Hall -- he and Hall had both fallen for the charms of the young artist Vinnie Ream. A letter from Bessels declaring that he was "thinking of her all the time," along with a letter from Hall sent from aboard the "Polaris" to thank her for the gifts she'd sent and describing them on display in his cabin, seemed to seal the deal. It was still conjectural of course -- but it was the first motive specific to Bessels -- as opposed to the other German scientific staff, many of whom resented Hall's leadership style -- that was supported by evidence from the time.

And now, with thanks to the researches of a reader of this blog by the name of Jesper Zwiers, we have evidence that Bessels may have killed again. It's an old truism of crime that a criminal, once emboldened by a successful but undetected murder, is likely to repeat his crime -- and here again the method appears to have been arsenic poisoning. The victim, however, is a bit of a surprise -- it was Bertha Ravene, a German-American opera singer who was engaged to be married to Bessels! The wedding date had been postponed twice before, and her untimely death occurred on the third date she and Bessels had planned to wed. The sequence seems  suggest that, as with Hall, the course of the poisoning began some time before her death, and was accelerated -- perhaps while Bessels was "treating" his fiancée -- before the final fatal dose. 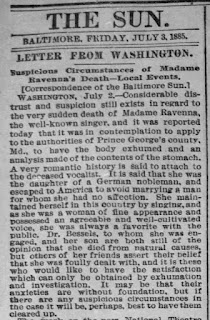 Something -- it's not entirely clear precisely what -- attracted the suspicion of people who knew the couple. It may have been that many still felt that Bessels was living under a cloud after the death of Hall; in some newspapers it's also said that he was acting "strangely" and that it was this behavior that raised questions. Madame Ravene's son apparently sided with Bessels, and one wonders whether he had some stake in his mother's life -- or death. If indeed Bessels hoped to profit by the death himself, it seems odd that he would have acted before rather than after the planned wedding. Numerous articles mention calls for Madame Ravene's body to be exhumed, and some even seem to assert that this was definitely going to happen -- but it appears from the lack of further news that it did not; one article states that "there will probably be no investigation" since "it is not generally believed that there was foul play." One factor that may be imagined to be in Dr. Bessels' favor is that, on the second planned date of their marriage, the couple did indeed arrive at the church, only to find the minister absent due to some confusion over the date. There's also the fact that Madame Ravene was, according to the physician who signed her death certificate, taking arsenic for malaria (!) but "only a quarter of a grain a day" (this would have been about 8 milligrams, far from a toxic dose). You can read more about these circumstances in this more detailed account of the events by a reporter who visited and interviewed Dr. Bessels. A note to those who want to dig a little further: Madame Ravene's name apparently posed a problem for newspaper and wire services of the day -- it appears both as "Ravena" and "Ravenna" -- so you'll need to do searches on each version to see all the available articles.

Sadly, no photograph of Bertha Ravene seems to have survived. Nevertheless, her image lives on, as -- around 1871, at the peak of her career, a new hybrid flower -- a camellia to be precise -- was named after her.
Posted by Russell Potter at 7:55 PM