The man with chains attached to his ears ... 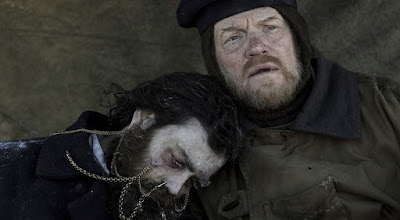 Many of those who  watched the final episode of AMC's "The Terror" were puzzled -- or horrified -- by the scene in which Captain Crozier finds Lieutenant Little -- or what's left of him -- his face festooned with tiny gold chains. This detail, so strange and haunting in the show, is in fact drawn directly from the testimony of Inuit who saw the bodies of Franklin's men. The sight of skeletons with gold chains about their necks was reported by multiple witnesses, both those who spoke with Charles Francis Hall in the 1860's, as well as others who spoke with Schwatka nearly twenty years later. What could this mean? Were these just decorative jewelry items worn by the men, or was there some more sinister explanation for them?

An Inuit woman who spoke with Hall told what Dave Woodman calls "one of the most powerful of all Inuit remembrances":


[An old woman] and her husband went to a big tent not very far from Neitchille, and among the frozen mass of human bones and bodies that were lying around in it she saw one Kob-lu-na body that had a bright white (probably silver) chain around the neck. She knew at once what the chain was for, as some of the other Neitchille Innuits had just come into possession of several watches and chains, which she saw.The body of this man was lying on one side, and was half imbedded in solid ice from head to feet. The way the chain was about the neck and running down one side of the body indicated that the watch was beneath it; and therefore, to get at the watch, she found a difficult and disagreeable task before her. Neither she nor her husband had any instrument with them that they would use for any such purpose as was desired; therefore, while the husband was seeking around, she procured a heavy sharp stone, and with this chipped away the ice from all round the body till it was released ... [The woman] could never forget the dreadful, fearful feelings she had all the time while engaged doing this; for, besides the tent being filled with frozen corpses - some entire and others mutilated by some of the starving companions, who had cut off much of the flesh with their knives and hatchets and eaten it - this man who had the watch she sought seemed to her to have been the last that died, and his face was just as though he was only asleep. All the while she was at work breaking the ice near the head, especially the ice about the face, she felt very bad, and for this reason had to stop several times. She was very careful not to touch any part of the body while pounding with the sharp stone. At last, after having pounded away the ice from around and under the body, her husband helped her to lift it out of its icy bed. Still she was troubled to get the watch from the frozen garments with which the body was completely dressed.

Those who have at times accused the Inuit of a want of feeling in recovering items from Franklin's men would do well to read that passage! Still, the idea of many men wearing watches around their necks sounds odd to us today: why wouldn't they be kept in pockets -- why around the neck? And why so many? And yet, if one sifts through all the testimony, it seems that watches were fairly ubiquitous; Hall heard multiple witnesses who echoed stories of of "watches found in the tent, found there in some of the clothes that covered some of the skeletons, some with chains knotted around the necks of the skeletons."

Frederick Schwatka heard such tales as well, in particular from a woman named “Ogzeuckjeuwock," who described the curious adornment one of one man who was found “with the flesh on.” This man “had a gold chain fastened to gold ear-rings, and a gold hunting-case watch with engine-turned engravings attached to the chain, and hanging down about the waist.[W]hen he pulled the chain it pulled the head up by the ears." Schwatka's companion Heinrich Klutschak similarly recorded “he wore ear-rings and a watch fastened to them (the ear rings) by means of a chain," though it seems that the nature of these adornments was the subject of some debate.

As my late friend Garth Walpole noted in his Relics of the Franklin Expedition:


It appears that that the [Inuit] statements had been forcibly challenged by Schwatka, Gilder and Klutschak. Gilder thought it particularly odd and tried to account for it. He believed that although the statement itself was peculiar, it was given in good faith and so concluded that either the chain had somehow become attached to the ears or he was just eccentric and liked to wear his watch in this fashion (Gilder 2006:73). The description given appears to be indicative of part of a pocket watch, but if the body was that of “Doktuk,” then the adornment may have been a stethoscope. If it was hanging around his neck, it may have looked as though it was attached to his ears. One could reasonably suppose that as a doctor, he may have felt it his duty to check the life signs of those with him; if not theirs then his own? All of the various accounts mention in association to the adornments a ring worn by the individual. While Klutschak’s account simply stated that the individual “wore a ring on his finger,” Schwatka and Gilder both recorded that it was a “gold ring found on the ring finger of the right hand” and, like the books, it too was given to the children and lost.

We may never know the precise significance of these golden accoutrements, but their presence is undeniable. The idea that the man with the "flesh on" may have been a doctor certainly adds pathos to possibility, and inevitably makes me think of Harry Goodsir, so memorably brought back to life by Paul Ready in the AMC series. The flexible-tube stethoscope had only been invented in 1840, but our progressive, forward-looking surgeon naturalist would, it seems, surely have been one of its early adopters.
Posted by Russell Potter at 6:33 PM