The grave of Heinrich Klutschak 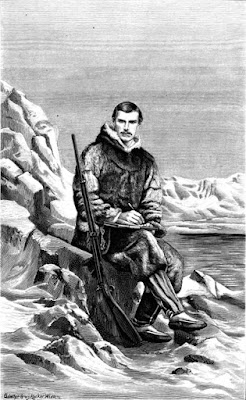 It often seems to be part of the story, and the saddest by far, when a famed explorer suffers an ignominious end: James Weddell (he of the Sea) freezing in his London flat because he couldn't afford a scuttle's worth of coal; Parker Snow, reduced to paying his rent by selling his books and papers; and Frederick Schwatka, a victim of his addition to laudanum, dead in an alleyway in Portland, Oregon with a bottle beside him. Yet few perhaps have suffered such an ignominious end as Heinrich Klutschak, the gifted artist and draughtsman whose service in Schwatka's expedition of 1878-1880 earned him accolades in America and the Cross of Honor from Emperor Franz Joseph. Following that honor, and the success of his book, Als Eskimo unter den Eskimos, he returned to the United States, but apparently found little success in any of the many lines of work in which he was skilled; he'd hoped to head north again, but ended up working as an errand boy at the firm of Morrison & Brown (known for having supported many such ventures with its ships and resources). Suffering from the effects of tuberculosis in a tiny flat at 330 Broome Street in New York's Bowery, he had been offered, through the kindness of his few friends, a rent-free room at Sailors' Snug Harbor in Staten Island, but was too ill to travel there. Finally, in early March of 1890, he decided to make the journey, but his choice of date was an unlucky one; a huge late-winter snowstorm swallowed the city in drifts, and he was forced to turn back, sicker than before. Finally on March 26th, he succumbed to his illness -- he was only 41 years old.

The same few friends who had arranged for his new home now arranged for his burial: J.C. Morrison (of Morrison & Brown), a certain "Dr. Franklin," who may have been his physician, and his landlady. The funeral home was Diehl's on Essex Street; in an irony that Klutschak -- who also served as the Schwatka expedition's cook -- might have appreciated, its premises are now a restaurant, the "Sons of Essex." The horse-drawn carriage then conveyed his coffin to the "Lutheran Cemerery," now known as the All Faiths Cemetery, in Flushing, Queens. Thanks to the kindness of the staff there, we now have located his burial plot, and thanks to my good friend and fellow Arctic historian Doug Wamsley, we now have a photo!  If you look very closely, or save the image and increase the contrast, you can make out HEINRICH in the first line, and the first few letters of KLUTSCHAK in the second. It’s my hope that, at some point, we might hold a fresh ceremony of remembrance there.

For now, his account of the Schwatka expedition, translated and edited by the ever-capable William Barr, remains as a testament; the original artwork and map for the German edition are preserved in Ottawa at Library and Archives Canada. And he who served an expedition that collected much valuable Inuit testimony is now fittingly the subject of that testimony; in oral histories preserved in David F. Pelly's Ukkusiksalk: The People's Story, the elders remembered him as Henry the cook, a man who always "spoke very loudly." Today, from his grave -- for those who know how to listen -- he speaks louder still.

[With thanks to Russ Taichman, who first asked where Klutschak was buried, Gina Koellner, who joined in the search, and Doug Wamsley, who made it to the grave site!]
Posted by Russell Potter at 2:08 PM