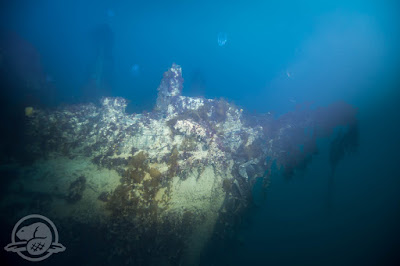 The image at left, recently released by Parks Canada, is captioned "Anchors still in their sailing position on the port stern quarter of HMS Terror." Earlier imagery showing an anchor cable (rope) played out from the ship had led some to think that the ship might have been at anchor, but as it turns out, the line had simply played out from the windlass and the anchor was still stowed. Had the ship been at anchor, that would have been evidence that, at least at some point, it had been re-piloted, since dropping or weighing anchor are things that can only be done if the ship is under someone's command, and a conscious decision and order has been made to do so.

Nineteenth-century Inuit evidence as regards the "Terror" is far more scarce than that concerning "Erebus," and for good reason -- the former ship sank quickly, in deep water, and "nothing was obtained from her," whereas the latter was, for many years, a go-to site for Inuit seeking wood and other valuable things. It's possible that the "Erebus" was even beached for a time, before sinking, and even after she sank, wood and other precious things washed up on shore. The Inuit had no such luck with "Terror" --which is good news for Parks's underwater archaeologists, although it seems that, for now, work will focus on the more damaged and fragile flagship of Franklin's expedition.

All of these matters speak to a central question: was either of the ships piloted to its final location? If so, an argument can be made that they completed the final link of the Northwest Passage (albeit that some feel that a discovery that the discoverer does not live to report should not be counted). Indeed, the same argument could be made of the survivors on land, since they reached and passed the location of Dease and Simpson's cairn (again, we know this from Inuit testimony, and again the men did not live to tell their tale). What could such evidence then be?

The possibility of the ships having drifted can't be entirely dismissed, however unlikely. Inuit testimony tells us that "Erebus" had been re-inhabited by a small group of perhaps four men, but it's not clear whether they arrived at her final location aboard, or simply found and used the vessel as a shelter for a season. The possibility is still less for "Terror," since drifting ships rarely send themselves into a convenient harbor, and indeed the general drift path of the ice would have taken southeast them along the same route as "Erebus," whereas "Terror" took a turn to the eastward. Some drifting ice has however -- on occasion -- followed a similar route, so such a course can't be entirely eliminated.

I suspect that the only way to really ascertain whether either ship was piloted would be to find a clear indication in writing. Even if manned by a skeleton crew, it would be contrary to all the training and habit of the Royal Navy to steer a ship and keep no log, no record, of its voyage. Barring the discovery of such a log, even a single dated document with some indication later than that in the Victory Point note saying the ships had been deserted would make the case for piloting much likelier, though it couldn't -- unless the writing specifically addressed what had happened -- eliminate the possibility that some men had simply re-occupied the vessel. And, in either case, it seems clear that, for at least some period following the initial abandonment, the ships drifted without guidance, and that such drift might affect how some people assessed the accomplishment of that journey.

Now that the question of national ownership has been resolved, and now that full cooperation and co-management of the finds with Inuit organizations and local communities are in place, the odds are that we will have some kind of answer to that central question. It's quite possible, though, that the answer may be ambigious or incomplete; in some areas of the Franklin story, we may simply have to learn to "let the mystery be."
Posted by Russell Potter at 7:42 AM