The Politics of Exploration 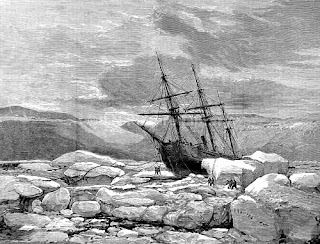 I had originally planned to be posting on my blog this fall about the new finds from HMS "Erebus" that I'd hoped would be announced by Parks Canada. Archaeology is a patient science, though, and though news is scarce now, I'm sure there will eventually be much more to hear about this remarkable discovery and the secrets it yet has to tell. But alas, the politics of exploration have once more taken over the headlines from actual exploration itself, journalist Paul Watson's would-be exposé -- the one he says the Toronto Star wouldn't let him publish -- has now been plastered over the Internet thanks to Buzzfeed. Ordinarily, I wouldn't want to comment on such an article, but now that major news outlets such as the Ottawa Citizen have picked up the story, I fear that I need to set the record straight again. While Watson's article certainly shows that there was a fair amount of squabbling and bitterness among some of the parties involved in the 2014 search, and that some details were, at first, imperfectly conveyed to the public (understandable in the great excitement of the moment), the evidence for any deliberate deceit -- especially on the part of the Royal Canadian Geographical Society's John Geiger -- is simply nonexistent.

A large part of Watson's article hinges on remarks made by Mr. Geiger as part of the CNC documentary on the Franklin find. As the lead historical consultant for the Canadian, UK, and US versions of this program, I've reviewed scripts and checked historical facts for all three, and so am very closely aware of the many slight differences between each version. The directors, using the same available "elements" -- video sources that, added together, would fill many times the length of the program -- made a variety of different choices. The moments that Watson points to, when John Geiger uses collective pronouns, such as 'we,' and 'our efforts,' and contrasting 2014 with previous years, are moments in which he's referring to the whole history of the modern Franklin search. Here are his exact words, from the final production script of the upcoming NOVA version of the documentary, which will air in the U.S. on September 23rd:


This is a great moment for exploration. We’ve been searching for, you know, a hundred and sixty years for answers to what happened to the Franklin expedition, the best equipped, most finely prepared and trained expedition that had ever set out for the Northwest Passage — and to have it literally obliterated, end in mass disaster, no survivors and no ships. It's just … it's been a confounding mystery.

Clearly, the "us" of this "we" is us -- all the people, Canadian and American and British, Inuit and non-Inuit, who have been a part of the long search, whether as researchers in libraries, writers/scholars, or people walking the ground or probing Arctic waters.

A shorter version of Mr. Geiger's remarks was used in the Canadian and British versions, where their intended meaning might not be as clear -- but in any case it was never, so far as I am aware, Mr. Geiger's intent to claim any credit as the discoverer. These false criticisms, made by Mr. Balsillie (see here for my earlier blog post pointing out that his letter of complaints about the CBC documentary has no foundation in that program's actual contents) and echoed in Mr. Watson's article, are without any basis in fact. The credit has been given, from the very start and consistently going forward, to Ryan Harris, Marc-André Bernier, and their divers, and I am absolutely certain that, whichever version of the documentary one views, there couldn't possibly be any confusion about this fact.

I agree with Madeline Ashby's op-ed piece in the Citizen -- it indeed matters who discovered the ship! -- but Mr. Geiger has never made any claim of having done so. While we are at it, though, the Parks Canada divers themselves have often acknowledged the importance of earlier work to their find -- to Inuit testimony, both still living in the person of Louie Kamookak, and that collected and analyzed from the historical record by David C. Woodman, and to all the searches and researches, adding up to nearly fifty searches between 1926 and 2008. As with all great discoveries, it's the ultimate result of the efforts of many. Among whom I would certainly include Mr. Geiger, whose book Frozen in Time, co-written with Owen Beattie is quite often the first volume that has caused a Franklin searcher-to-be to develop a deep and lasting fascination with the Franklin story -- and that's what fuels us all.
Posted by Russell Potter at 4:07 PM