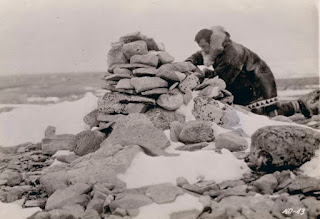 Richard Finnie -- shown here on a search, in company of L.T. Burwash, of the northwestern coasts of King William Island in 1930 -- was not only an avid investigator of the Franklin mystery, but also a pioneering filmmaker; while his Among the Igloo Dwellers (1931) never attained the status of Nanook of the North, it remains a significant early depiction of Inuit life in the pre-settlement period. Finnie eventually gained steady employment working for Canadian Bechtel on a series of more than 60 films promoting its petroleum projects -- one of which, 1967's "Fabulous Oil Sands," would doubtless raise hackles among environmentalists today (the curious can see the entire film here).

Finnie was born to the North in Dawson City in Canada's Yukon Territory in 1906; his maternal grandfather had founded the Dawson City News there in 1899. His father, Oswald Sterling Finnie, was from 1921 to 1931 the "Director" of the Northwest Territories and Yukon Branch. The younger Finnie shared his father's passion for the region, and started out at the age of eighteen as a radio operator aboard the C.G.S. Arctic. Late in the summer of 1930, he accompanied L.T. Burwash on the latter's search of King William Island; on September 6th they located what they believed to be a significant Franklin "camp" between Lady Jane Franklin and Victory Points; the results of their study were published in the very first issue of Canadian Geographic. In the 1930's he spent several years in Yellowknife, of which he left some very vivid descriptions.

Finnie later took an avid interest in music, and while on locations around the world for Bechtel, made a large number of field recordings of traditional music from Korea, Libya, Tunisia, Sumatra, South Africa, Lebanon, Cambodia, and Venezuela; these recordings are preserved in the Finnie collection at Stanford University. The collection also includes a number of significant live recordings of jazz performances and jam sessions, including some of Mugsy Spanier and Earl Hines.

Finnie is warmly remembered by those who knew him, my friend John Bockstoce among them. He eventually retired to California, but kept up an interest in northern doings for the rest of his life; he died in 1987. If anyone out there knows where a print of Among the Igloo Dwellers may be had, I'd certainly like to hear from them! It's a very hard film to find; the only copy I know of is a 16mm print at Library and Archives Canada.
Posted by Russell Potter at 8:43 AM