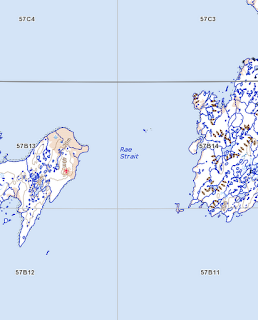 Recently, the question of in how Dr. John Rae's charting of the strait that bears his name contributed to the tracing of a Northwest Passage. There can, I hope, be no question that Rae was one of the most skilled and capable Arctic explorers and surveyors, and that his establishing King William as an island was a discovery of great geographical significance. There are those, however, who wish to credit Rae, at the expense of Franklin, as the sole discoverer of the  passage, and for them, a key part of the claim is that the Rae Strait route would have been navigable by Franklin's vessels had he tried this route. And yet, it's also widely known that, although Roald Amundsen managed this route with his tiny Gjøa, he encountered shoals which obliged him to jettison a considerable amount deck cargo in order to avoid running aground.


Rae Strait is 14 miles wide. I have sailed through it half a dozen times in ships that are far larger -- longer, heavier, and with much deeper drafts -- than the Erebus and Terror. I did it again last month. Google the Clipper Adventurer and compare. Big ships go through Rae Strait all the time, even in the dark. Amundsen was sailing very near the coast of KWI, that is all. A bit farther out, no problem whatsoever.

For the record, the Clipper Adventurer, a purpose-built vessel for adventure tourism, has a draught of 4.72 meters (15.5 feet); HMS Terror had a draught of 4.47 m (14 feet 8 inches); according to Amundsen's journal, the Gjøa, fully loaded, drew just over 10 feet.

A recognized reference on the subject, The Northwest Passage: Arctic Straits, by Donat Pharand and Leonard H. Legault, puts it succinctly: "Reconnaissance soundings show an uneven bottom with depths varying from 9 to 77 meters and an extensive shoal area in mid-channel of 5.5 to 18 meters. The Rae Strait would hardly seem suitable for deep draft navigation." It's possible of course that a sailing vessel of Franklin's kind might have, with very good fortune, have made it through -- but then there would be the far worse problem of Simpson Strait, which is filled with shoals and hazards.  The modern vessel "Hanseatic" (draft 4.8m) spent three weeks aground there in 1996, and Pharand and Legault class it as "obviously suitable for small ships only."

So how practicable is this route -- which must of necessity include both Rae Strait and Simpson Strait? To get a definitive answer to this question, I turned to Captain Patrick R.M. Toomey, one of the most experienced modern navigators and ice-pilots in these waters; he has made more than 30 voyages to the Canadian Arctic, including 13 complete transits of the Northwest Passage (the most recent just two weeks ago), and has commanded or piloted all manner of vessels ranging from Canadian Coast Guard icebreakers to enormous Russian vessels such as “Kapitan Khlebnikov."Although Toomey shares with me and many others a profound admiration for Sir John Franklin's mettle, he understands well the limits of the vessels of those days, and feels as I do that they would never have been able to manage this route.

In response to McGoogan's claim, he states:


The “Clipper Adventurer” has been through the straits to the east of King William Island, as have other small ships of less than 5 metres draft such as “Hanseatic," and Rae Strait is not the major problem on this route. Further north, the James Ross Strait, and to the southwest the Simpson Strait are far more dangerous, as the “Hanseatic” knows only too well, having spent almost three weeks aground in the Simpson Strait in 1996. If Ken McGoogan considers “Clipper Adventurer” to be a “big ship”, he should try “The World” at 6.7 metres draft, and 196 metres length, or the Russian icebreakers “Kapitan Khlebnikov”, “Kapitan Dranitsyn” and “Admiral Makarov” (all of which I have piloted) at 8 metres draft, which could, technically and theoretically, pass all three of the straits mentioned above, but would be very foolhardy to try.

As to McGoogan's views about Rae, he has this to say:


As for the claim that John Rae was the first to discover a navigable Northwest Passage in 1854, to give him credit he did discover one of the minor channels which form the route, which Franklin might have discovered himself during his three overland and small-boat expeditions from 1819-1823, if he had had more time and better luck. I would suggest that Franklin suspected there might be several routes to the north from Queen Maud Gulf – the south shore of which he had mapped - but that he was more interested in the wider channel to the west of King William Island, due north of his explorations along the coast east of Coppermine River.  With two clumsy Royal Navy warships hardly capable of sailing to windward, with auxiliary steam power insufficient to make any progress in ice, for lack of power and sufficient coal to fuel the boilers, he would certainly have tried a wider channel to offer more sea-room. The full facts will never be known, of course, but I am sure that shore parties went out to King William Island while the ships were beset during the winter of 1846/7, to check out any channels to the east.  I am equally sure that the report back would have been that such channels would not have been recommended, despite the lack of old ice, which is not usually found in those channels, because of the lack of sea-room to manoeuvre between the shoals, especially those of James Ross Strait.  It was in James Ross Strait, I believe,  that Amundsen had his problems, and he was in a tiny little vessel, of much less draft, and much more manoeuvrable when compared to “Erebus” and “Terror”.

So this, I hope, should put an end to claims that Franklin could have sailed the route mapped by Rae. All the same, this route certainly could be and is a valid passage for modern vessels with shallower drafts, equipped with modern charts and electronic sounding devices. And, all the same, Dr. John Rae remains am extraordinary explorer, skilled surveyor, and resourceful hunter, who passed through lands where other white men died of starvation managing not only to keep himself and his party well-fed, but giving food to local Inuit along the way. So let us give him credit to him, alongside Sir John Franklin, not instead of him.

Yes, Franklin failed on his last voyage.  But let us recall, in the words of the great novelist (and navigator) Joseph Conrad, the essence of Franklin's contribution, as well as the discoveries of those who searched for him:


The dominating figure among the seamen explorers of the first half of the nineteenth century is that of another good man, Sir John Franklin, whose fame rests not only on the extent of his discoveries, but on professional prestige and high personal character. This great navigator, who never returned home, served geography even in his death. The persistent efforts, extending over ten years, to ascertain his fate advanced greatly our knowledge of the polar regions. As gradually revealed to the world, their fate appeared the more tragic in this, that for the first two years the way of the Erebus and Terror expedition seemed to be the way to the desired and important success, while in truth it was the way of death, the end of the greatest drama, perhaps, played behind the curtain of Arctic mystery.

Posted by Russell Potter at 9:06 PM