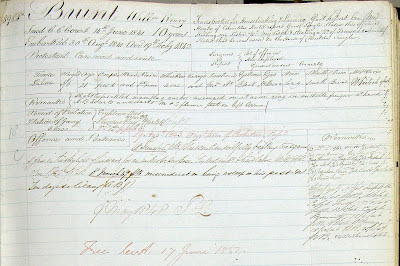 As readers of this blog may well imagine, it didn't take me long to plunge into further research on my ancestor, William Henry Brunt, and his time in Van Diemen's Land. The Tasmanian Archives turned out to be a wonderful -- and free -- resource, and I was fairly quickly able to locate his official conduct record. His voyage aboard the aptly-named "Tortoise" seems to have taken nearly seven months; judging from the ledger of convicts it seems that it also stopped in Halifax to take on prisoners -- one wonders whether Bill Brunt's first sight of North America whetted his appetite for his later return.

After the particulars of the voyage, the ledger gives his name and crime -- housebreaking and larceny, 10 years. Interestingly, he seems to have objected to the charges, stating that it was his sister's house into which he had gone with the intention of retrieving his sister's things. He admitted to taking a pair of Trousers and handkerchiefs, however, yet curiously declared "he was never in the House of Correction," although his report from there stated his conduct was good. He was also described as "Protestant -- can read and write," which corresponds, I think, with his family's origins near Banbridge in County Down, Ireland, where his surname was spelled variously "Brunt," "Brunty," and "Brontë."

From his physical description I learned that he was 5 foot, 5 inches, with brown hair, brown eyes, and no whiskers. He was apparently fond of drink, and was also the proud owner of a riotous array of tattoos, which the ledger is at pains to enumerate:

The "HB" might just be his initials, if he used his middle name -- many convicts seem to have gotten their initials tattooed on themselves, probably just to be sure their body could be identified after death. Since no photograph of Bill Brunt survived in my family, this may be the most vivid image I'll ever have. The remainder of the record details his time in Van Diemen's land:

His arrival at Flinders Bay in 1843 put him among the first group of transported prisoners to be stationed there for their probation, since it had only been established in 1841. The work was hard, clearing trees and brush, and the prisoner station was not long maintained there, with all the remaining prisoners being transferred to Port Arthur in 1844. Given the term of his sentence, his two infractions -- breaking a glass skylight and falling asleep on his watch -- seem quite minor; the large ledger page allotted each convict was, in his case, less than 1/3 filled, while others spill out into long lists of offenses (and others -- the briefest -- say simply "Died at Sea" or "Died in the Mines"). He earned his freedom in June of 1851, and must have lost little time in finding passage to Canada. Perhaps the rumors of homesteads there made it a more attractive destination for him -- or perhaps it was his earlier glimpse of the land that enticed him.
Posted by Russell Potter at 7:40 AM