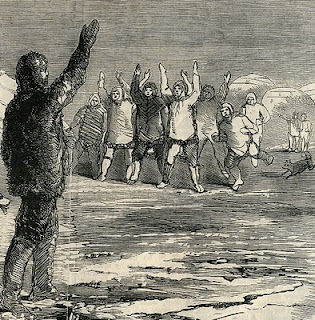 Who was "Aglooka"? There's been a great deal of chat about this eternal question over on the Facebook page on the Franklin Expedition, with quite a few new voices. And so, although I'd caution that I don't think that we will ever have an absolute or complete answer, I thought I'd take the opportunity here to ask the question.

Aglooka -- aglukaq in Inuktitut -- means roughly "long strider," and from the point of view of the Inuit, it's a term that could be applied to almost any of the white explorers who sojourned among them. It's been associated, at various times and by various conjectures, with Sir John Ross, Frances Crozier, and Dr John Rae, and in Inuit oral histories, there are stories which -- depending in large part on when one decides the events recounted took place -- could apply to one or more of these main candidates. Some, like Charles Francis Hall, were convinced "Aglooka" was Crozier, and held fast to that belief even in the face of contradictory evidence. Some, like the eminent Franklin expert David C. Woodman, believe it more likely that "Aglooka" was not one of the senior commanders of the Franklin expedition, but rather a minor officer or even and ordinary seaman who took on a leadership role in a small group of survivors. So -- if everyone is ready -- let's review the evidence.

First there is the question of contact with the expedition while aboard their ships. Inuit testimony given to CF Hall tells us of an encounter with an expedition of two ships, one commanded by a bald man who wore spectacles (little pieces of ice) over his eyes, and who suffered some infirmity. He was called Toolooah, and his second-in-command was Aglooka. Some time after the Inuit had visited them, they told Hall that they heard that Toolooah had died, and that Alglooka had become the Esh-e-mut-ta (Hall's phonetic spelling for isumataq or leader). Such a scenario corresponds only with the Franklin expedition, as that of the Rosses -- the only other British voyage to the central coastal area in the period -- had only one ship (The Victory, unless its small coal-tender Kreuzenstern is counted), suffered no death of a commanding officer, and both Rosses were possessed of vast and healthy heads of hair.

Nevertheless, there's a problem when one connects this account to Franklin and Crozier and the Erebus and Terror: During the time they were off the NW coast of King William Island, they apparently had no contact with Inuit, since later Inuit did not, by their own account, know of ships abandoned in this area until they learned of them by way of McClintock in 1859. It's possible that the Inuit who did visit the ships did not, for some reason, communicate their visit to other Inuit bands -- there was some hostility, apparently, between the Netsilingmiut of the Boothia Peninsula who were McClintock's main informants, and the Utjulingmiut whose territory near Queen Maud Gulf put them closest to the final locations of Franklin's ships. Still, on the basis of this discrepancy, Woodman discounts the idea of any contact between Inuit and Franklin's men prior to the ships' abandonment.

We also have Inuit testimony as to witnessing the funeral of some important person near the ships. It's tempting to think this was Franklin's funeral, but when he died the ships were far offshore, separated from KWI by several miles of hummocky old ice. Woodman thinks it was, more likely, the funeral of a different, senior officer, and took place some time after at least one of the ships was re-piloted further south; this would explain the fact that the Inuit who saw it were still unaware of the Victory Point cache or any ships near there. He thinks it may well have been Crozier's funeral, a conjecture which, if true, eliminates him as a candidate for "Aglooka."

Curiously, after these accounts, our next tales of an encounter with a possible "Aglooka" seem to deal with the party of men who left the ship or ship and travelled south and then east along the coast of KWI. Somewhere along that trek, there was an encounter at the crack in the ice, where the white men traded a knife for some seal meat, and "cooked the meat with the aid of the blubber (a foolish waste of good, caloric blubber from the Inuit viewpoint). The Inuit named two of these men -- "Aglooka" was one, and the other "Doktook," the latter possibly an Inuit attempt at "Doctor." They described how Aglooka made notes in a little book, and tried to tell them what had happened to the ships by pantomime. This is perhaps a significant detail, as we know that Crozier, during his time with the Inuit of Igloolik on Parry's second expedition, was said to have learned the Inuit language better than any of the officers -- so why would he resort to pantomime? Then again, the officer did say that he was trying to get to "Iwillik" -- the area near Repulse Bay -- so maybe his vocab was just a little rusty.

We next hear of the finding of "Aglooka" at the Todd Islets, in the form of the body an officer with a gold chain around his neck. Yet the Inuit who made this identification seem to have used the name because they thought this man was Ross!

The last accounts of an "Aglooka" have to do with a man who was an excellent hunter -- so good that he shared food with the Inuit. The description matches Rae, and it's hard to rule him out as a source of some of these stories. Old Ook-bar-loo's cousin, Too-shoo-ar-thariu -- according to her at any rate -- had hosted a group of four men, including this "Aglooka." Aglooka was weak and ill, apparently because he refused to eat human flesh. The others were stronger. Too-shoo allowed them to stay in his igloo and hunt with him for a season, nursing Aglooka back to health. One of the men, not Aglooka, died early the next season, and the other three headed south, apparently planning to skirt the western coasts of Hudson's Bay and make it to Fort Churchill. They never made it; according to Hall's later informants near Marble Island, they may have been killed by sub-Arctic Indians along the way. Before they left Aglooka, who was described as a "great officer," gave Too-shoo his sword.

Hall was, of course, thrilled to think that this Aglooka was Crozier, and always referred to him as such in his diaries. He faced two disappointments: first, that Too-shoo-ar-thariu, when he finally met him in person, denied his aunt's account. Further queries seemed to indicate that Too-shoo was among the men who'd met at the crack in the ice, and that he and his fellow hunters had packed up and left, even as Aglooka ran from his tent begging them to stop. This shattered Hall's faith in the Inuit. Then, hearing the account of the possible murder of Crozier on his way south to Fort Churchill, Hall lost faith that there were any survivors of the Franklin expedition.

Aglooka, or "aglukark" as it is more often spelled, is still a common Inuit surname. The great Inuit singer Susan Aglukark was born in Fort Churchill, the place that Hall's "Aglooka" had sought to reach. And, more recently, when the Inuit of Gjoa Haven retained the services of a lawyer in their quest to protect the contents of the (later found to be empty) box under the cairn near their town, the lawyer they hired also had the last name Aglukark.

So who was this man -- who were these men? The world may never know...
Posted by Russell Potter at 8:26 AM