Art from the Arctic 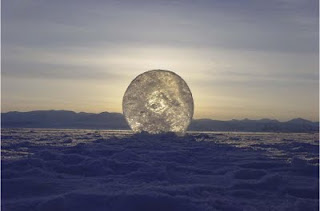 The Arctic has spurred the creativity of artists for centuries, marking as it does the border between the known and the unknown, the visible and invisible worlds. As historian Robert McGhee so eloquently put it, they are, in many ways, the "last imaginary place" on earth. Most of the time, artists relied on the sketches and accounts of explorers, reconstructing this unearthly country by borrowing the witness of those who sojourned there; some of the most astonishing works -- Friedrich's "Sea of Ice," or Landseer's "Man Proposes, God Disposes," were painted by men who had never approached within a thousand miles of the Arctic Circle. And yet, even in the nineteenth century, there were artists -- sometimes a whole shipload of them -- who headed north to see this singular landscape for themselves. The Armerican artist William Bradford chartered annual excursions for photography ice-painting nearly every year from 1861 to 1867. In 1869, aboard the Panther, with the explorer Isaac I. Hayes as their guide, Bradford and his fellow artists journeyed father north than any such party had managed before, venturing deep into Melville Bay before being turned back by the implacable barrier of pack-ice at about 75º north. In his quest to make the most of his northern sojourns, Bradford regularly brought along hired photographers to take studies of every scene. Two of these, John L. Dunmore and George P. Critcherson, accompanied him on the Panther, making hundreds of wet-plate collodion images, from which Bradford later drew from to assemble the massive elephant-folio volume, The Arctic Regions.

Such a thing, I had until now thought, was a curiously nineteenth-century notion: putting artists on a picture-making cruise seemed somehow both bold and quaint. And yet just today, just by chance, I stumbled across a documentary, Art from the Arctic, which describes a series of voyages made between 2003 and 2005, with British filmmaker David Buckland taking the role of Bradford, and the passenger-artists including sculptors Anthony Gormley and Rachel Whiteread, choreographer Siobhan Davis, and the writer Ian McEwen. The film documenting their journeys is, happily, available to watch free online, both at Hulu and at SnagFilms (I recommend the latter, as it's free of adverts for insurance companies). The film itself isn't terribly remarkable, though there are some lovely shots of Svalbard, including calving glaciers and a polar bear which -- thanks to a telephoto lens -- looks dangerously close to a boatload of defenseless artists. Nevertheless, the story it tells is a remarkable one; in this day and age of virtual visits and Skyping sociality, it's somehow encouraging to see artists and writers actually enduring the rigors of a sea voyage -- and, in one case, a wintering-over -- simply to gain that ineluctable thing that we still can call "experience." I recommend it very highly, and hope that perhaps this sort of thing may happen again -- if it does, I'll put in for a ticket.
Posted by Russell Potter at 12:11 PM