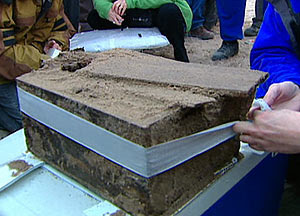 News that the box unearthed from under the Gibson memorial in Gjoa Haven did not contain any Franklin records came as no surprise to those of us who have been following the story -- least of all to Kenn Harper, whose research clearly showed that all that had ever been buried there was an Amundsen record and photograph. But these, too were missing, as was the white marble slab which was supposed to have been incorporated into the monument. This puzzled us all, until I read this post on Ken McGoogan's blog, in which he recounts his conversation with Louie Kamookak, Gibson's grandson. According to this posting, the Amundsen record, as well as the marble block, had been removed from the cairn a few years after their deposit by another party of HBC employees, and had been deposited in the Yellowknife archives.

I was stunned to think this was possible, and this morning searched the online archives of the Prince of Wales Northern Heritage Centre; prior to the establishment of the territory of Nunavut in 1999, this is where all such artifacts would have been deposited). And, although I didn't find a listing for the Neumayer photo, the marble slab (or at least a photo of it) is indeed there. Its description, complete with a spelling error, makes its identity clear: "White marble plaque place by Amundsen in 1903 at Gjoa Haven. The plaque is 1/2 mile east of the settlement. Amundsen left many records under this."

That the stone could have ended up at PWNHC would not, in other circumstances, be a surprise; they have many such artifacts, including the original grave-boards of the Franklin crewmen buried at Beechey Island (the ones on Beechey are replicas with bronze nameplates). But that the Government of Nunavut, the Porter family, and a bevy of lawyers would have taken the time, the trouble, and the expense to dig up a box whose contents were not only known, but safely on deposit in a government archive, boggles the imagination. The official press release states that "despite the fact that the box did not contain the objects originally thought to be inside, this was an important project to undertake given the potential significance of these items and their importance to the local community." Well, if that makes sense, I've got some "Franklin" records buried in my back yard that I'd love to have the government help me re-landscape.

No public word yet on how or why this non-story ever got the funding and attention it did -- and my experience tells me not to hold my breath.

UPDATE: Kenn Harper has pointed out that the photo at PWNHC appears to be from the 1940's, prior to either the stone or the record having been moved to the Gibson monument -- so there's no clear confirmation as of yet whether they have either of the actual physical items.

UPDATE II: I have just had confirmation from the Prince of Wales Northern Heritage Centre that they do hold items "related" to the Gjoa Haven find -- they won't be specific, though they confirm they have "a photograph" and a "small bit" of the marble slab, saying these items are now part of the Archives of Nunavut, and under its jurisdiction.
Posted by Russell Potter at 5:59 AM