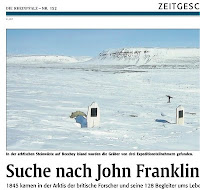 In the 1850's, the search for Sir John Franklin captured the attention of all of Europe, with headlines in every language. McClintock's narrative was translated into French and German within a few months of its publication, and international interest in further searches remained strong.
Now, with a renewed search this summer, the Franklin story is once again attracting attention in the EU, particularly in Germany. German interest has always been strong, spurred by the immense success of Sten Nadolny's novel Die Entdeckung der Langsamkeit (English: The Discovery of Slowness) in 1983. A week or so ago, I heard from Gerd Braune, a journalist in Ottawa, that he was preparing a piece on the new Franklin search for several German-language papers. He asked for, and I gave him, permission to use a photo I'd taken of the Franklin expedition graves on Beechey Island.
Just yesterday, he sent me copies of the resulting article. It's available here at Diepresse.com, and you can also see .pdfs of the large, illustrated versions in the Luxemburger Wort as well as Die Rheinpfalz. The articles are informative and well-written (I don't read or speak German, but my daughter has been studying the language for some time, and was able to translate them for me), and contain a few additional details -- my personal favorite comes at the end, where perennial Franklin pointman Louie Kamookak muses laughingly that, if the ships are found based on his information, he may henceforth be known as "Sir Kamookak."
Posted by Russell Potter at 7:38 AM