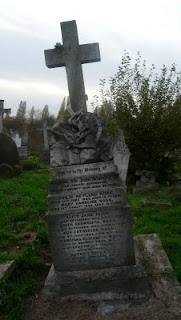 The day after the Franklin memorial service in Greenwich this past October, a number of us met at Kensal Green Cemetery in London for a walking tour of Polar graves. Among our party were Dr Huw Lewis-Jones, Kari Herbert, and Kenn Harper, and on our list of graves to visit were Lady Jane Franklin, Sir John Ross, Admiral Inglefield, and Admiral McClure. None of us had visited the site before, and as the sun was slowly sinking in the west, we hurried against time to locate them using a map of the cemetery and directions from a guidebook. We weren't quite sure what to expect, the more so given the somewhat wild look of Kensal Green itself. Although home to many a famous skellington, the grounds were only barely maintained -- some attempt had been made to trim the grass, with the cuttings blown about this way and that -- and the uneven settling of the ground made many of the monuments lean this way and that. "DANGER: Loose Stonework and Collapsing Graves -- Keep to the Roads and Pathways" warned a sign we passed on our way in, and it was a warning well heeded.

The first of the graves we found was that of Sir John Ross; it was in fairly sound condition, though listing notably to starboard. The carved anchor with chain was largely intact, and the applied metal letters -- a standard of the era, apparently -- were all still in place. We next turned our search toward Lady Franklin, whose marker was of a simpler construction, a stone cross on a tiered pedestal -- precisely, it soon appeared, the same as hundreds of memorials in the vicinity. It was some time before we stumbled upon it, and it was a sad sight; many of the metal letters had come loose, leaving little holes in the limestone base. "ADY FRANKLIV" the stone read, "DIED 18 ULY 9," and underneath "SOPHIA CRACRO" followed by a nearly illegible inscription. The words "Arctic,""search," and "brave companions" could be made out, but not much more. To capture the mood, I sang a stanza of the ballad "Lady Franklin's Lament"

'Twas homeward bound one night on the deep,
Swinging in my hammock I fell asleep
I dreamed a dream, and I thought it true
Concerning Franklin, and his gallant crew ...

A man passing by asked for directions, breaking the mood and leaving us all to our own thoughts. Kenn has written about the sad state of this memorial in his Taissumani column in the Nunatsiaq News, and I heartily agree with his comments there: "I was frankly shocked. So this was the fate of the mortal remains of the second most-famous woman in mid-19th century England."

Next, we tracked down Admiral Inglefield, whose career was connected with the Greenwich memorial we had just attended; he was the very one who had brought back the bones supposed to be Le Vesconte's from Washington D.C. to London. His memorial was half-covered over with grass and dirt; after running back to the car for some work gloves, Huw managed to clear off much of the debris, and we found the inscription intact. His epitaph singled out his Polar experience, reading "Commanded three Arctic expeditions 1852.3.4 and discovered 800 miles of new coasts."

Lastly, we located the monument of Robert McClure, which turned out to be very difficult to locate; its low, pink marble stone gave it the look of a far more recent grave. And yet, obscure though it was, the epitaph was, in many way, the most satisfying of the three:

Afterwards, we also managed to locate the grave of Wilkie Collins, which was quite near McClure's; it too was in a rather shabby condition, despite a small placard informing us that the Wilkie Collins Society was responsible for its maintenance. All in all, it was a strange and somewhat melancholy visit, with our distress felt most deeply over Lady Franklin's marker. Surely the woman that the Times of London once called "Our English Penelope" deserved a better marker, or at least a better maintained one, than this!

Posted by Russell Potter at 1:32 PM