Repost: Christmas in the Frozen Regions 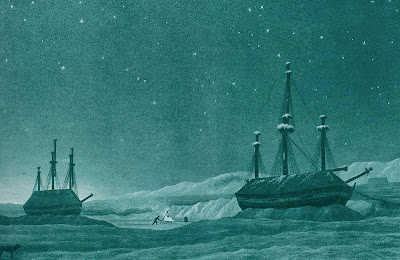 At this time of year, many of us are seeking a bit of Christmas past by revisiting Charles Dickens's "A Christmas Carol." There are innumerable local productions, dozens of film versions (I'm most fond of the one starring Alistair Sim, or else the Muppet Christmas Carol, which I actually feel is the best recent adaptation), and of course the book itself is always available. But most today are less acquainted with Dickens's other Christmas tales -- at one point he was writing a new one every year -- or with the many special Christmas numbers of his magazines Household Words and All the Year 'Round, which Dickens personally selected and edited with great care. It was, in fact, in 1850 -- the very first year of his first magazine, Household Words -- that Dickens, hoping to revive the fading hopes that Franklin and his men might yet live, selected a piece describing an Antarctic Christmas aboard the "Erebus" and "Terror" -- the very ships that Franklin had taken on his expedition a few years later. Making this connection was important enough that Dickens wrote a fresh introduction to the article, as well as a brief coda, himself, and his words are animated with all his usual spirit:

"THINK of Christmas in the tremendous wastes of ice and snow, that lie in the remotest regions of the earth ! Christmas, in the interminable white desert of the Polar sea ! Yet it has been kept in those awful solitudes, cheerfully, by Englishmen. Where crashing mountains of ice, heaped up together, have made a chaos round their ships, which in a moment might have ground them to dust; where hair has frozen on the face; where blankets have stiffened upon the bodies of men lying asleep, closely housed by huge fires, and plasters have turned to ice upon the wounds of others accidentally hurt; where the ships have been undistinguishable from the environing ice, and have resembled themselves far less than the surrounding masses have resembled monstrous piles of architecture which could not possibly be there, or anywhere; where the winter animals and birds are white, as if they too were born of the desolate snow and frost; there Englishmen have read the prayers of Christmas Day, and have drunk to friends at home, and sung home songs."

The account that follows is by Robert McCormick, who had recently served under James Clark Ross as surgeon and naturalist aboard HMS "Terror," and describes the first Christmas of their Antarctic voyage. McCormick seems to have been an excellent writer, and this account is all the more notable as it's his earliest publication; he found himself unable to write up the expected naturalist's report for the Ross expedition, and his own account of his career, Voyages of Discovery in the Antarctic and Arctic Seas, was not published until 1884. As Dickens hands the narrative off to McCormick, the mystery and anxiety then surrounding Franklin's name is directly evoked:

"In 1819, Captain Parry and his brave companions did so ; and the officers having dined off a piece of fresh beef, nine months old, preserved by the intense climate, joined the men in acting plays, with the thermometer below zero, on the stage. In 1825, Captain Franklin's party kept Christmas Day in their hut with snap-dragon and a dance, among a merry party of Englishmen, Highlanders, Canadians, Esquimaux, Chipewyans, Dog- Ribs, Hare Indians, and Cree women and children.

In 1850, some commemoration of Christmas may perhaps take place in the Frozen Regions. Heaven grant it! It is not beyond hope ! and be held by the later crews of those same ships ; for they are the very same that have so long been missing, and that are painfully connected in the public mind with FRANKLIN’S name."

You can read McCormick’s account in full here. Of course, much of the resonance of his story is how it shows the explorers keeping the traditions of home, evoking an elaborate Victorian Christmas even in the most desolate regions of the world. On this occasion, the ship was redecorated as a "hotel," and the drinks were kept cold by being served atop an enormous block of solid ice. McCormack, oddly, says very little about the food, but other explorers were far more voluble; you can follow the links here to read of a feast of "Banks Land Reindeer" in "Christmas-Keeping in the Arctic Regions, 1850-51," relish Elisha Kent Kane's Christmas on the Second Grinnell expedition, at which mere "pork and beans" were disguised as all manner of delicacies by the men's scurvy-fed imaginations, or devour A.W. Greely's luxurious first Christmas with the Lady Franklin Bay Expedition at Fort Conger, which featured mock-turtle soup, salmon, tenderloin of musk-ox, plum pudding with wine sauce, dates, figs, cherries, egg-nog, and an extra ration of rum -- a sad contrast with the meals of the last few survivors three years later, who endeavored to support life by fishing for brine-shrimp through a sieve.

Wherever readers of this blog may find themselves this Christmas, I hope that your evening meal is enriched by all the warmth and spirit of domestic tranquility that these men's meals -- whether in reality, or in their imaginations, or both -- sought to evoke so far away from home.
Posted by Russell Potter at 5:00 AM