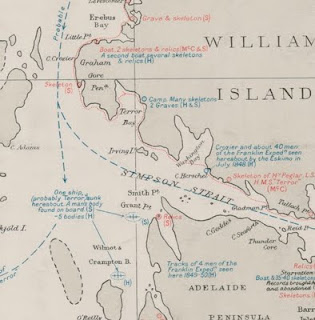 A major new digital initiative of the Library and Archives of Canada has recently been completed: the digital scanning of all the British Admiralty Charts of Canadian waters. It's an impressive feat, the more so in an era when the Library has had severe cutbacks in staff and funding; perhaps the present Government's interest in the Northwest Passage and issues of Canadian sovereignty helped ensure that the project would be funded. Whatever the reason, it's cause for celebration among Arctic researchers. Among the digitized, zoomable charts is the original full-colour version of Rupert Thomas Gould's map of King William Island, officially known as Admiralty Chart No. 5101. To help users of the map weigh the evidence from different sources, map indications based on Naval observers were given in red ink, while Inuit testimony was shown in blue. You can now zoom in on any detail, and drag the zoomed image to show adjacent areas; it's almost as good as having the chart in your hands.

The only drawback of the project is that, vaster (or at least as vast as) Empires, it moves more slow -- much more slow. Even on a high-speed internet connection, searches seem to take a minute or more to run, and the full map image can take up to five minutes to finish loading. The search indicators and limiters are few, and are also slow to run, making it difficult to navigate that especially treacherous strait between too many and too few (or no) hits. Searching by name provides a potential shortcut, but this search option looks through all digitized materials, not just the maps; for places where there is a lot of other material, such as photographs, this can mean searching for the same needle in an even bigger haystack. Nevertheless, the results, when one does locate the chart wanted, are spectacular indeed, and will certainly reward the patient searcher.
Posted by Russell Potter at 5:34 PM