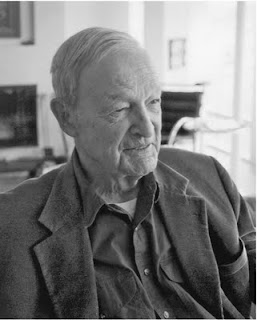 I was saddened yesterday, on looking at the table of contents for the latest issue of Arctic, to come upon an obituary notice for Chauncey Loomis. I'd known he was ill, but the last few e-mails I'd had from him were as lively and irascible as ever. From a man who would often be away on fishing trips to such far-flung places as Tierra del Fuego, an absence of a few months seemed unremarkable; just last summer, he'd told me of a trip to New Brunswick, where, by his own account, he had enjoyed "the best salmon fishing I've ever had in almost 40 years of fishing for the creatures." It's especially strange in this electronic age, when e-mails remain in one's in-box, the "reply" button clearly visible -- to suddenly discover that no reply will ever be possible again.

The obituary notice in Arctic, written by Loomis's longtime friend Constance Martin, struck all the right notes. Still, in the sudden realization of his passing, I couldn't help but be struck by how much my work owed to his, and wondering how many people today are aware of it. It wasn't his delightful book on Charles Francis Hall, Weird and Tragic Shores, which I first stumbled on, but rather his essay "The Arctic Sublime," published in 1977 in the anthology Nature and the Victorian Imagination. This single essay, with the illustrations and color plates (!) that Loomis managed to have printed with it, was in many ways the spur for all of my work on the Arctic in Victorian painting, illustration, and photography. Many of its images, such as Friedrich's Das Eismeer, William Westall's engraving, after Beechey, of the Hecla and Griper at Melville Island (I never did find out where Loomis had found his lovely blue tinted version) , and of course Sir Edwin Landseer's "Man Proposes, God Disposes" have remained central to my work from that moment. While Loomis was certainly correct in his famous apothegm that "The Sublime cannot be mapped," his writing surely served as a map of all the places I would need to go in pursuing my own researches into the Arctic and visual culture. It was also a welcome sign that an English professor could cross over old disciplinary boundaries, and do so with verve and style.

Loomis could be bold -- but he was also, when he felt it right, cautious. Despite his discovery of arsenic in tissue samples taken, at his behest on an expedition he'd organized, from the grave of Charles Francis Hall, he refused to jump to the conclusion that Hall had been murdered, or say who was to blame, without more than what he considered, at best, circumstantial evidence. In that case, I once thought he was a bit too cautious, but having had the experience of seeing a few of my own bold conclusions founder upon the sands of presupposition, I see his views in a somewhat different light. When it came to the important things -- bringing a character such as Hall to vivid life -- there was no one better than Loomis. The Hall papers offer a daunting cart-load of contradictions, the remains of a life he never lived to set in order; that Loomis was able from such jumbled materials the narrative he did is an exemplary work of humane scholarship, and a book which to this day my students find among the most readable and engaging on my list of texts. Weird and Tragic Shores has been re-issued by the Modern Library, although I've found that, year to year, it seems to go in and out of stock at the publisher's. If for some reason any of you who are reading these words have not read it, you owe it to yourself to obtain a copy, and head directly to a comfy chair to read it. It is a book which, as Cervantes once said of Tirant lo Blanc, deserves to be kept in print forever.
Posted by Russell Potter at 7:37 AM